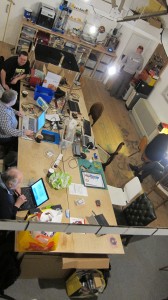 A makerspace or hackspace is a place where like minded people can get together and share their interest in science, electronics and all things technological. The aim is to share knowledge, show off our skills and inspire each other to new heights of inventiveness. There’s never been a better time to be interested in technology due to the amazing array of tiny devices that can be hooked together to do amazing things. In fact, over the last few years a global movement of hackers, makers and fixers have sprung up doing extraordinary things with technology. Everyone has heard of 3D printers by now but modern makers also have access to low cost CNC machines and laser cutters. Machines that used to be for specialist industries only have found their way into garages, sheds and spare rooms all over the world. This comes at a time when there’s a drive to recycle, upcycle, repurpose, reuse and repair, anything to avoid the landfill. The final thread is the open source movement where not only software developers but hardware developers too have thrown open their efforts to be duplicated and modified in a continuous cycle of innovation and improvement. This is where hackspaces live, places to fix the unfixable and build the unlikely, a place to learn skills and share skills.

The typical view of the word hacker is the criminals and vandals that steal credit card numbers or deface web sites but this is very far from the origin of the word. Originally a hacker was someone who wanted to explore technology, frequently by taking it apart to see how it worked and then modify it to do things the designers never envisaged. The word suggested someone with curiosity, some engineering skills, a tool user, a builder and a certain “playful inventiveness”. This meaning has been revived with the modern hackspace movement. Communities of interested people making, doing and learning and not one credit card number gone missing.

Take a look at some of the UKs flagship hackspaces, for example Cambridge or London.

Special thanks to James from http://bytingidea.com/ for producing our logo