Unfortunately our latest venue, 83 Grimwade Street, did not work out for us. This is a real shame, since we were starting to open up more frequently and getting a real Makerspace atmosphere with actual making taking place.

We could take this is a step back, but I feel we must take this as a positive, it is an opportunity, an opportunity to find a more suitable venue, with better access and walls and floors we can bolt kit to.

For the short term we will revert to meeting on the 2nd and 4th Thursday of every month. The next meeting is this coming Thursday, and we are reverting back to the Trinity Church Hall. See the events page for more details and we look forward to seeing you there.

We need to reach out to all property owners/agents, businesses etc. Please ask around and if you come up with any potential leads for a new venue please do get in touch.

The fourth Thursday of the month is approaching, that can only mean one thing. It’s talk night.

On Thursday 23rd June Keith will be giving us a broad overview of 3D modelling in AutoDesk Fusion 360. This is a powerful, easy to use modelling environment free to Makers for Windows and MacOS. It can produce very nice 3D renders as well as easily outputting files for 3D printing or laser cutting, with advanced CAM features and also allows movement studies and stress analysis to be carried out. Keith will outline the general workflow which he has come to know well whilst designing last years Pi Wars entry along, with a live demonstration and quick overview of the move advanced features. 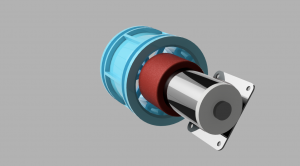 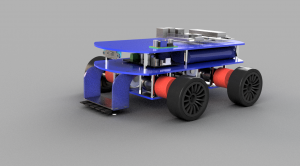 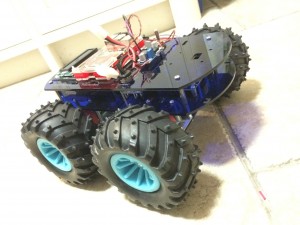 I had a great evening at the Ipswich Makerspace last week. For a while I had been pondering a broken sellotape dispenser, so I decided to do something about it. The sellotape was held by a large spool, with a smaller tapered spool inside. The smaller spool has two prongs which are supported by the main dispenser. The problem, one of these prongs had snapped off.

So i took the spool, a vernier gauge and drew it up in Autodesk Fusion 360. Exported the stl file and with help from a few of the others at Makerspace got the 3D printer going. The print was not perfect, the printer needs a bit of tuning, but it worked and I now have a fully functioning sellotape dispenser again.

Makerspace for the Win!

The last meeting was held at a trial venue, 83 Grimwade Street. It tuned out it is actually rather nice and has lots of potential, including the ability to have permanent storage and eventually equipment.

So all future meetings will be held here.

The internet is being installed Friday apparently, so as long as it all goes well we should also have online access. If anyone has a spare large flat screen TV they no longer want, it would be most welcome so we can get the retro games room on its way.

Look forward to seeing you all there next week on 25th February.

We have some very exciting news. A few of the members have been scoping out new venues, one in particular looks very interesting. The next meeting on Thursday 11th February will be held at this venue.

The next meeting will not be at the usual venue. We will be meeting at 83 Grimwade Street, Ipswich.

Parking is available in the UCS car park near the Waterfront, free from 6pm. If you are bringing something large or a lot of stuff then post here or on Facebook as you may be able to park by the property briefly and unload.

This meeting will be opening at 6pm to allow for extra setup time and scoping out that may required. This is not confirmed as a new home yet, so keep an eye on Facebook and the website for the locations of future meetings to ensure you turn up at the right door. We shall endevour to give you as much notice as possible.

Grimwade Street is a busy road, so park up in the UCS car park and walk round. You are looking for this building hiding behind the trees.

Last night was our final meeting for 2015 and I think everyone enjoyed themselves. I’d like to say thanks to some of the stars of the evening. First up, I’d like to say thanks to Sean for bringing in his new gadget; it certainly attracted a great deal of attention and was a lot of fun. Sean, if you have a URL for your gadget, please let me know and I’ll edit it in here, I don’t want to say too much in case I give something away that I shouldn’t. Next I’d like to say thanks to the PiWars team for bringing in TractorBot 20125 and their runner-up trophy. I think some of their swag may have crept into the quiz prizes too; I got a very handy Ryanteck IO expander which was nice. While I’m on the subject of quiz prizes, thanks to Tim for providing a mix of novelty and genuinely useful prizes. Topher seemed pretty pleased with his multi-tool and who wouldn’t love a gold wind-up toy robot? Of course, a big thanks has to go to Jon for organising the Xmas quiz again, it was funny and frustrating. It’s great to hear a room of techie types howling because they can’t remember what some of the acronyms that now run the world, or at least the internet, actually stand for.

And of course we all learned something new in the name-that-tune round, except Phil, who got it in a heartbeat; ‘Sweet Home Alabama’ played on Tesla coils. This has to be seen to be believed, 500,000 volts arcing around making the old school sounds of Lynyrd Skynyrd.  If that’s not enough, how about putting a person in between two coils, you know, to see what happens. Obviously those people know precisely what they’re doing, please don’t bbq yourself or the cat trying it out. What else did we learn? Oh yes, don’t give Vincent wine after dark, Amy knows the moves to the Macarena and I had a misspent youth. It was good to see some people returning after a bit of an absence, Alan, Simon, and Sean. Sean took time-out to get married, go on honeymoon and what not, congratulations Mr and Mrs Billings. Also a couple of new faces Sam and Peter, hope you both had a good time.

At some point I’m afraid I gave out false information regarding the makerspace rules. After removing the ones which directly or indirectly concern member’s behaviour during a Zombie Apocalypse, they are as follows:

Gary did his duty by rule #2 so big thanks to him, to Peter for helping out at his first meeting, and Sara for doing the drying.

I’ll post the next meeting ‘real soon now’, but as a head’s up it’s going to involve some show and tell. Everyone is bound to get some new gadget over Christmas either as a present, when Kickstarter finally coughs out the PiJuice or when temptation gets too great for that thing they’ve been thinking about for the last six months. Bring along all Santa’s swag to the first meeting next year so we can all ooh and ah over it and add yet more critically important stuff to our wish-lists.

A final big thanks to everyone who has come to the meetings this year, they’ve been great fun and that’s all down to you, the members of this great Makerspace of ours. With creative thinking, lots of hard work and some luck, 2016 will be even better. I have to go now, I’m welling up …

We had a great soldering tutorial at last weeks meeting, which was taken by Keith.

It consisted of a short presentation and then hands on with some Raspberry Pi kits to get some practice. It was enjoyed by all and most learnt something new and now have the confidence to get out the soldering irons and get soldering.

If you wanted to attend but could not, or even if you did attend and want a recap, the presentation is on the Makerspace wiki. Visit the wiki here: So the next meeting, Thursday 28th May will see Tim run the second part of his three part SQL course. This time we are planning to have access to the break out room to ensure other making and discussion is not hindered.

Tim will be discussing advanced data retrieval, this will be an interactive session so please remember to bring your laptops along and make sure you have access to a ‘proper’  text editor.  It makes lift so much easier.

Our next meeting is rapidly approaching. This week on Thursday 26th February we have Jon talking to us about Node-Red, a web based interface for Internet of Things (IoT). It sounds really interesting. The Talk will be in a break out room so the usual making can continue if Node-Red is not for you.

Our calendar of events can be found here.

We had another great makerspace meeting this week, talks from Frank about micro controllers (the plural of micro-controllers does not give the quantity any justice, there must have been nearing on 100 of them!). Andy from Cedarcroft Productions who does some laser cutting explained what he could do for us, you can find his web site here, I’m certainly looking forward to getting some stuff cut.  Then John, our ‘founder’ described his mechanical and software biased history, including an attempt at Robot Wars, a little searching found this link.

After a short break for tea and cake we took to our feet and started exploring projects the members had brought along.  There were robots, 3D printers, Kinect 3D modelling and real time body mapping (if that is what it is called) and a hex-copter.  The hex-copter made two indoor flights.  the first did not finish so well but survived unscathed.

The second flight was a bit less eventful but we did manage to get some on board footage, showing a good attendance at the makerspace.

If you like what you see and want to get involved, we meet on the 2nd and 4th Thursday each month.