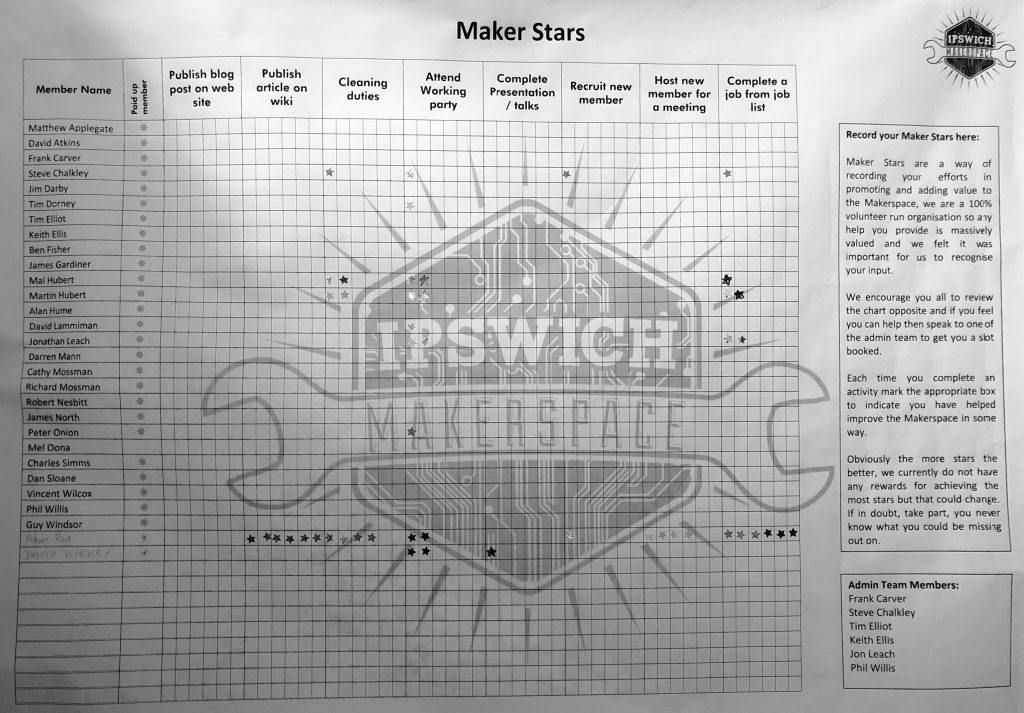 Ipswich Makerspace have had an amazing year, with an exciting future ahead.  All of our success is down to the effort put in by our members.  Obviously some put more effort in than others, but no matter how much effort is applied, we appreciate it and want to reward and acknowledge it.  Last year we came up with the Maker Stars Chart.

This was a simple chart, with a list of potential actions with a list of members names, the idea being if you did a good deed you applied a star on the chart adjacent to your name.  After a year of it being on the wall, we got quite a lot of engagement with lots of starts applied.

So when it came to our Christmas Party this year we could not let it pass without acknowledging our most engaged members.  So this Christmas the acknowledgements went to (in absolutely no particular order) :

There were more people to be acknowledged and you can see the chart above, but we decided to keep it to those who were in attendance at the Christmas Party.  That does not mean we do not appreciate the efforts of all those people who were not at the party or chose not to take part in the Maker Stars chart.

So to everyone who has impacted the Makerspace in the past year, Thank you VERY much.

There is a new chart up in the space now for the coming year.  Names are not pre-populated, so please do add you name and start collecting those stars.  We don’t promise anything, but who knows how we may choose to acknowledge people this year.  One thing we do know though, if your name’s not on the list your not going to be selected.

So don’t be shy, if you’ve done something to benefit the Makerspace, give yourself a star.

Here’s to a wonderful 2019, it’s going to be exciting and we want you to be part of it.

A big list of things to talk about and prioritise but I propose a working party next saturday (11th) to make a start. If you want to get involved but can’t make this Saturday have a chat with one of the committee members to let them know. Chances are we’ll be doing stuff on Thursday evenings too as long as it’s not intrusive. Also mention anything you think we’ve forgotten.

The Makerspace are organising the third Ipswich Raspberry Jam, tickets are now on sale (for free). 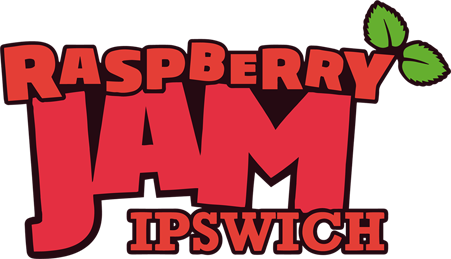 If you have heard about the Raspberry Pi and want to learn more, already have one but don’t know how to get started then go and register for tickets. We shall be having show and tells, demonstrations, talks and a couple of work shops where you can get hands on with a Raspberry Pi.

If you are keen to show off your project, give a talk on how the Raspberry Pi has influenced or affected you, help out in the workshops or generally to help the event run well, please get in touch. membership@ipswichmakerspace.com

Unfortunately our latest venue, 83 Grimwade Street, did not work out for us. This is a real shame, since we were starting to open up more frequently and getting a real Makerspace atmosphere with actual making taking place.

We could take this is a step back, but I feel we must take this as a positive, it is an opportunity, an opportunity to find a more suitable venue, with better access and walls and floors we can bolt kit to.

For the short term we will revert to meeting on the 2nd and 4th Thursday of every month. The next meeting is this coming Thursday, and we are reverting back to the Trinity Church Hall. See the events page for more details and we look forward to seeing you there.

We need to reach out to all property owners/agents, businesses etc. Please ask around and if you come up with any potential leads for a new venue please do get in touch. 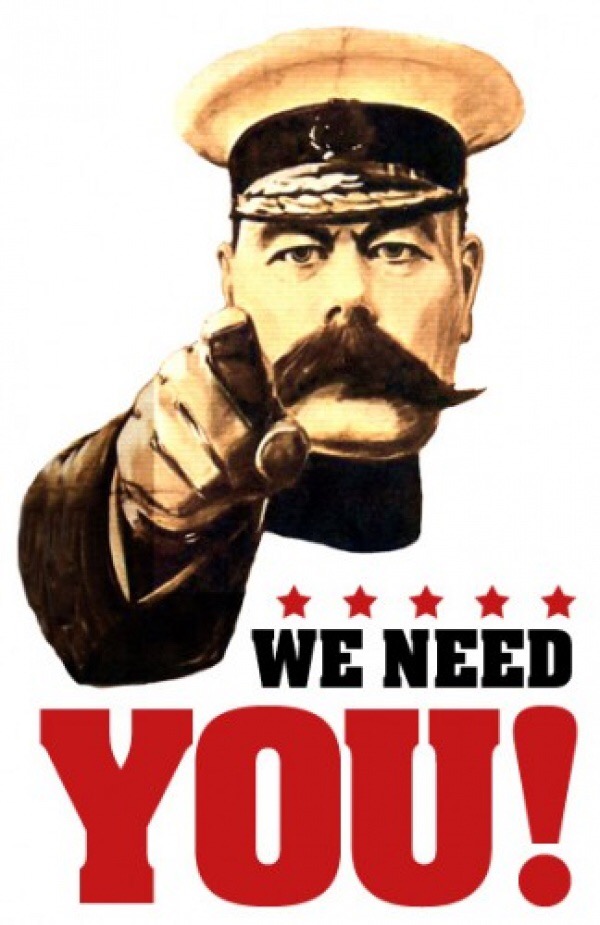 The Makerspace is growing, it has been a slow process, but it’s come a long way from the three or four people sitting and chatting in the Brewery Tap.  We now have our own venue and with it an opportunity to create something great, something we can be proud of, something Ipswich can be proud of.  What do we create though?

Well, that’s not down to me, Ipswich Makerspace is a not for proffit organisation to serve you, the community.  Like all things, you get out what you put in.

So what can you do to help? Any number of things:

The last meeting was held at a trial venue, 83 Grimwade Street. It tuned out it is actually rather nice and has lots of potential, including the ability to have permanent storage and eventually equipment.

So all future meetings will be held here.

The internet is being installed Friday apparently, so as long as it all goes well we should also have online access. If anyone has a spare large flat screen TV they no longer want, it would be most welcome so we can get the retro games room on its way.

Look forward to seeing you all there next week on 25th February.

Ipswich Makerspace now have Forums, anyone can register and post so please make use of them. They are in beta at the moment so if you have any comments please let us know.

To try them out visit forums